Why the tree regulations aren’t working 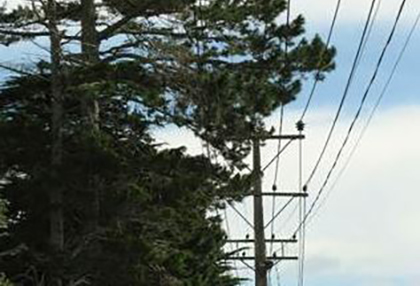 Approximately 180,000 Aucklanders had their power disrupted after strong winds caused massive damage to Vector’s network. A further 15,000 customers went without power in the Counties Manakau area.

Half the affected customers had their power restored within a day, but a small minority of unfortunate families and businesses had to wait a week.

Auckland consumers are right to question why there was so much disruption in April 2018 caused by trees, and what improvements could be made to reduce future outages.

The Electricity Networks Association says a big part of the problem is the inability of network companies to manage most trees which threaten to disrupt supply and potentially block access by special vehicles and equipment required to fix downed lines.

An ENA survey of its members found that 60 to 70 percent of outages in storms were due to trees. And the frequency of significant storms appears to be increasing.

Trees around lines are regulated by the Electricity (Hazards from Trees) Regulations, passed hurriedly in 2003 and, despite much dissatisfaction from the electricity lines industry and growing number of tree-related outages for consumers, never reviewed.

As seen in Auckland, Counties, and many other parts of New Zealand in recent years, the tree regulations are not working. While we can never prevent trees from hitting lines, a lot can be done to reduce the incidence of it occurring.

The tree regulations are highly prescriptive and transactional. Prescriptive because the regulations focus on set distances between trees and lines. The distances are meant to protect the security of supply and the safety of the public.

Transactional because they take account of only two parties – the lines company and the tree ‘owner’ – who must follow a process involving measurement of distances, various zones, issuance of formal ‘cut and trim’ notices for every tree, and punitive actions. Failure to obey a cut and trim notice could result in a $10,000 fine, but there is no record of a fine ever being imposed.

The set distances proscribed in the regulations very depending on the voltage of the line. For the standard 240-volt line running along city streets, trees and other vegetation are permitted to grow to within half a metre of a power line, before being required through a bureaucratic process to be trimmed back to one-and-a-half metres.

For the vast majority of trees, these distances are inadequate. For example, no action can be taken until a tree is as close as half a metre from a line. This is a very small gap and clearly insufficient to prevent trees swaying in high winds to clash with lines.

Some trees are very fast growing. They might require two trims in a season. Fast growing trees tend to be less resilient to high winds.

Another problem with the tree regulations is identifying the ‘tree owner’, which can be different to the land owner or occupier. In the case of forestry, the tree owner might be a post office box in Geneva. Communication could take months. Meanwhile, the trees keep growing.

Even after a tree is cut, a problem persists. While a newly-pruned tree might be physically separated by up to 1.5 metres from a line, the tree might tower many metres directly above a line, meaning branches can fall across conductors, shorting them out or bringing them down.

What’s more important is that a tree is separated by its ‘fall’ distance – the horizontal distance a tree will reach if it breaks at the base. But a fall-distance separation is needed only if the tree is likely to fall over. Some are, some aren’t.

The ENA wants to move from anachronistic prescriptive regulations to modern principles-based regulations which allow lines companies to carry out and act on risk assessments on trees near power lines. A risk assessment would look at the attributes of individual or belts of trees, the immediate environment, and the risk to the electricity system.

The risk assessment should include factors such as:

The government’s infrastructure plan released in 2015 included a review of the effectiveness of the tree regulations, which was welcomed by the ENA at the time.

This review has been timetabled to be carried out in the 2017-19 financial years by the Ministry for Business, Innovation, and Employment (MBIE), but the review had not started by April 2018. ENA is encouraging the government to begin the review as soon as possible, so that more effective ways of managing trees can be put in place as soon as possible.

(A report into the issue of the tree regulations was commissioned by the ENA and undertaken by Opus. It can be accessed here: Opus-Tree-Regs-Report-May-2014-Final.pdf)