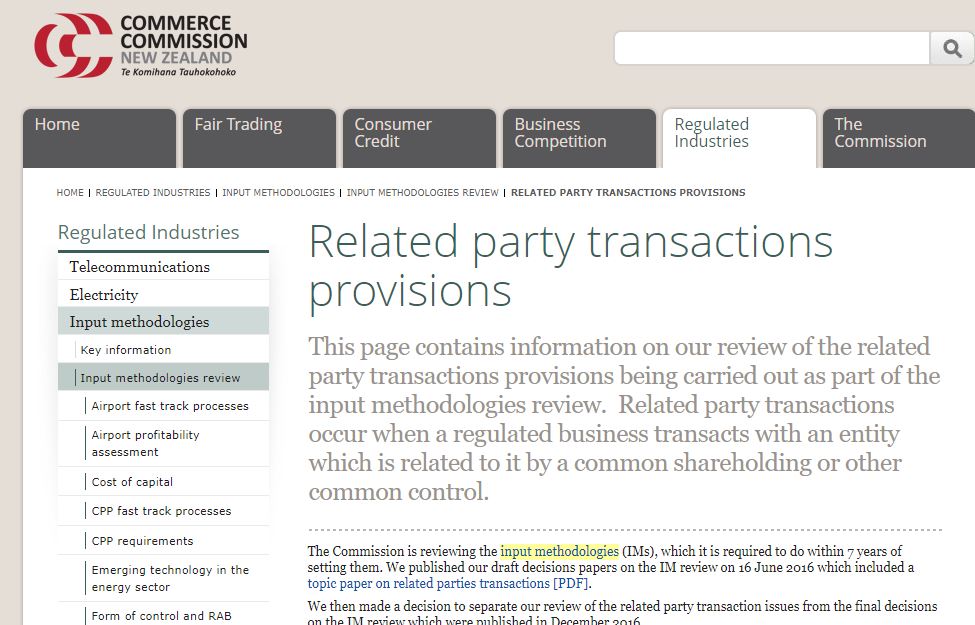 A tougher approach from the Commerce Commission on related-party transactions should halt calls for Electricity Distribution Businesses (EDBs) to ‘ringfence’ competitive services from their regulated monopoly business.

The commission today released a draft decision on related party transactions which substantially increases regulatory scrutiny on the accounting relationships between electricity distribution companies and their related parties.

“The Commerce Commission has indicated in its draft decision that it is taking a much tougher approach to transactions between regulated and unregulated activities,” said Graeme Peters, chief executive of the Electricity Networks Association.

The ENA is still absorbing the lengthy draft ruling and it’s too early to give a detailed response.

But early feedback suggests that the requirements on EDBs to provide even more information and independent assurances will result in higher compliance costs, which EDBs will reluctantly have to pass to electricity consumers.

“The ENA will of course give feedback to the commission by the submission deadline in an effort to reduce these requirements in the interests of consumers.

“And we will continue to work positively with the commission to refine and, if necessary, implement their more intensive approach.”

The changes include valuing related-party transactions at arms-length using a principle-based approach based on international accounting standards. Regulated monopolies will have to develop a methodology that tests the transactions for their value, identifies and applies competitive price signals, and benchmarks transaction values.

There are also greater disclosure requirements on EDBs in terms of procurement, assurances, and testing, and they must publish a ‘map’ of anticipated network expenditure with related parties.

Mr Peters said some retailers have been calling for more Bradford-type reforms, by requiring the complete separation of an electricity company’s monopoly service from its unregulated competitive services. This would require separate boards, assets, and staff based in separate buildings.

“Based on the proposed related-party transaction rules, ringfencing would be completely over the top.

“The new commission requirements should end any discussion on ringfencing, which is now totally unnecessary. The commission has listened to the concerns of stakeholders and acted. Any further calls for ringfencing would be opportunistic and clearly designed to restrict the introduction of competition that ultimately gives more choice to consumers.”