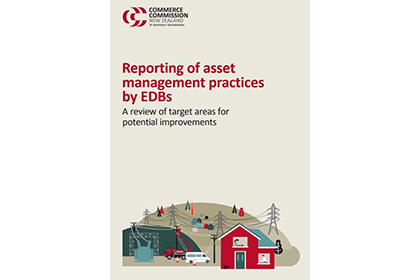 The Commission today published a summary of electricity distribution businesses’ asset management plans in the context of preparing for an expected surge in electricity consumption and mass uptake of new technologies such as electric vehicles.

It found nearly all lines companies or electricity distribution businesses (EDBs) reported action taken or planned in preparation for the future, with some going further and embedding decarbonisation into their strategic objectives.

“The findings reflect the high levels of awareness among lines companies that New Zealand is on the cusp of a sea change in how people generate, store, and use electricity. Lines companies are a key part of supporting this exciting transformation.

“This universal view is reflected in EDBs already improving their networks and systems to prepare for greater use of electricity to displace climate-change causing fossil fuels. Examples include increasing visibility of low-voltage networks, electric vehicle charging trials, load shifting, and supporting non-network solutions which don’t require more poles and wires.

“While the Commission’s review accurately summarises network companies planning at this point in time, network companies aren’t resting on their laurels. They know there is more work ahead to support a predicted doubling of electricity by 2050, the target date for reducing net emissions of most greenhouse gases to zero.

This work is not limited to lines companies. Government also has a significant role by ensuring that modern regulation supports the electricity sector in enabling decarbonisation.

“ENA is supportive of efforts by the Commission to ensure the regulatory settings for lines businesses are fit for purpose to facilitate New Zealand’s new energy future, and we look forward to more constructive engagement on this topic.”

Among its full membership by lines companies, ENA is supporting collaboration and cooperation to enable the low-carbon future through work streams such as the Network Transformation Roadmap. The first version of the roadmap, published in 2019, is being updated to a new version launched next year.