Transitioning out of the low fixed charge pricing option for electricity 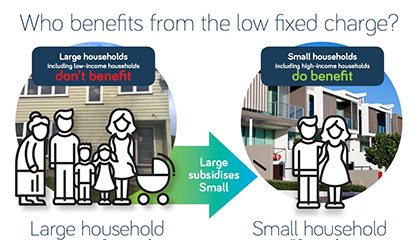 The removal of the Electricity (Low Fixed Charge Tariff Option for Domestic Consumers) Regulations 2004 was recommended by the Government initiated Electricity Price Review in 2019.

Phasing out the Low Fixed Charge (LFC) regulations will make pricing fairer for larger, often low-income, households which don’t qualify for the low fixed charge. These consumers are effectively subsidising the costs for smaller households which, due to the LFC, don’t contribute their fair share to network costs.

The Government has opted for a five-year transition out of the regulations to ensure those who are currently on LFC plans are not significantly or unreasonably impacted by their removal.

Electricity Networks Association chief executive Graeme Peters says that 60 percent of consumers currently on the low fixed charge in the most deprived areas will actually see lower charges as a result of the removal of the LFC.

“Removing the low fixed charge will ensure all consumers pay a fair price for electricity and will not penalise greater consumption,” Peters says.

“Average consumers – those consuming between 5,000 and 8,000 kWh of electricity per year - will see very little impact from the removal of the low fixed charge.”

“Those using more than 8,000 kWh per year – which often includes large families – will see a decrease in electricity charges as a result.”

The electricity industry is working with the government to offer some pricing relief through the transition period for those ultra-low-use consumers most impacted by the change, and who are in genuine energy hardship.

With the Government’s intention of moving away from fossil fuels as an energy source to address climate change, it will be important to encourage greater use of electricity in the home to replace carbon-based energy. Electricity will progressively replace petrol as a fuel for cars and gas for space and water heating.

A 2019 study by Concept Consulting determined that not removing the LFC regulations would result in an economic cost of up to $1.5bn over 30 years and hurt the environment by adding 8 million tonnes of carbon dioxide emissions out to 2050 through disincentivising uptake of electric vehicles and heat pumps.

“Doing away with the regulations will also smooth out power bills through the year – reducing large bills during the winter months - making it easier for families which struggle to budget”.