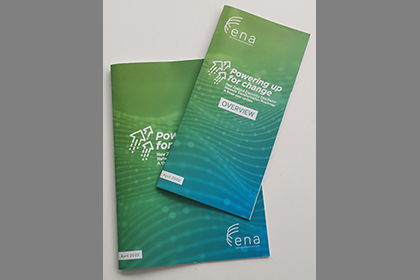 Three years after first launched, the Network Transformation Roadmap has been updated to further support networks adapting to a looming revolution in how electricity is generated, delivered, and used in coming decades, and in much greater volumes.

Graeme Peters, chief executive of the ENA, the industry association for lines companies, says the Network Transformation Roadmap is “an important high-level blueprint for networks” which are facilitating a low-carbon future that will benefit all New Zealanders.

Electricity lines companies operate the poles and wires delivering electricity to every region across New Zealand.

The Network Transformation Roadmap was first published in 2019 in anticipation of the significant role that lines companies would play in a transition to a low-carbon economy.

The 2022 update – Powering Up for Change - critically examines the original roadmap and, while finding it fundamentally sound, has identified refinements to priorities and outcomes.

Two energy-intense sectors targeted for transformation away from reliance on fossil fuels to renewable electricity are transport and industry.

The updated roadmap notes that while uptake of electric vehicles (EVs) hasn’t yet been as rapid as initially projected, useful progress has been made by lines companies researching EV owner preferences and behaviours when charging batteries.

Meanwhile, the urgent need for electricity or other forms of renewable energy to displace fossil fuels for industrial heat has been confirmed by various industry and government stakeholders since the original roadmap.

Lines companies’ ability to accommodate the resulting higher loads on their networks form one of the initiatives necessary for decarbonisation, and initial progress in this area is on track with expectations in the original roadmap.

Peters says the work which preceded the update found that lines companies were ramping up their visibility of low-voltage networks by collecting greater amounts of data to aid their modernisation and identify looming pinch points.

Also, as part of the roadmap update, a twice-yearly review of innovation being undertaken by lines companies in support of transformation has been initiated and will ensure sharing of resources and efficient collaboration between companies.

Peters says that while transformation presents technical challenges for lines companies, the sector is committed to facilitating the required decarbonisation initiatives.

“Good planning and collaboration between lines companies and other stakeholders is essential to achieving a timely transformation,” he says.

“Regular reviews of progress and continually updating the sector’s plans to achieve decarbonisation are what this refresh of the Network Transformation Roadmap is about.”