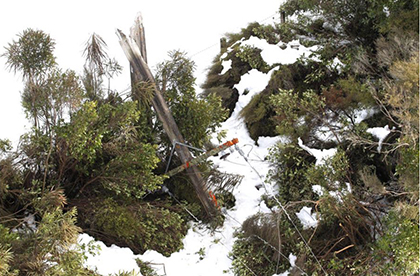 The prolonged power outages during storms this July for consumers in lines company Powerco’s Taranaki and central-north Island area were mostly the result of trees damaging lines.

Graeme Peters, chief executive of the Electricity Networks Association (ENA), said that due to wind or snow, entire trees fall, branches break off, or swaying branches cause lines to clash.

“Many outages could be prevented if trees were set back from lines by at least a tree length, or there were much greater separation distances between trees and lines,” he said.

“Lines companies must be given the tools to work with landowners to manage vegetation which is a risk to lines.

“While we do this as effectively as we can, in some cases this is difficult due to ineffective regulation.”

It has been 15 years since the Electricity (Hazards from Trees) Regulations 2003 were hurriedly introduced, he said.

“Their purpose is to protect the security of supply and the safety of the public. This is not happening. The regulations are not effective.”

The government has announced an investigation into its tree regulations. The investigation, which the ENA fully supports, will be in 2017/18.

“We are confident that the investigation will show that improving the regulations will give lines companies more ability to reduce risks posed by trees, saving money for customers who ultimately foot the bill for repairing lines,” Graeme Peters said.

“Better regulation won’t eliminate outages, but it will reduce the number of tree-related incidents, which means more customers keep the lights on.”