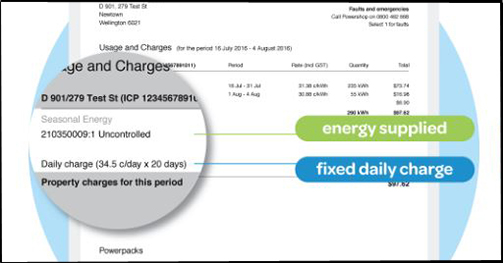 Submitters to the government’s electricity price review were almost unanimous on one subject: the low fixed-charge regulations must be revoked or transitioned out of.

The 30-cents-a-day fixed charge introduced 14 years ago is distortionary and not fit for purpose. It favours well-off consumers, while hurting the genuinely hard-up.

Christchurch-based Sunshine Solar/YES Power, summed it up in one word:

Sunshine Solar/YES Power is among the mainstream. Of the 38 people and organisations which had a view on the low-fixed charge, 36 said it had to go or be substantially improved.

Only two said the charge should stay.

The regulations enacted in 2004 require retailers to offer domestic consumers a daily fixed charge of no more than 30 cents a day. Half of that goes to the customer’s electricity retailer, half to the network company providing poles, wires, transformers and switchgear.

That sounded great to the politicians of the day who wanted to control monopoly lines companies, trim power bills for low-income households, and incentivise energy conservation.

Warnings of the risks were ignored.

And the problem? Electricity distributors’ fixed costs are typically $2 a day for a household – 13 times the fee allowable under the regulations.

Retailers also have fixed costs unrelated to how much electricity they sell to their customer. To cover the shortfall, they are forced to charge more for energy - which creates a perverse incentive for consumers to use less.

And modern technologies – like solar, heat pumps and insulation – let those who can afford them take advantage of that.

Originally intended to be for pensioners and other small power consumers, today more than half of all consumers qualify for the low-fixed charge. In some areas, so many consumers use less than 8,000 kWh a year – the eligibility threshold – that for simplicity the network company has put all consumers on the low rate.

While lowering consumption might sound like a good idea, it’s not a great choice for low-income households under-heating their homes to save money.

So the regulations favour wealthy consumers who live in their own homes and can invest to reduce their usage, while hurting those in rented accommodation, or the larger families who use more than the threshold.

In 4,000 pages of submissions to the price review, retailers, distributors, and Transpower were united in seeking change. As an alternative, several suggested re-working the government’s winter energy payments to focus on those most at need.

The Electricity Authority also sees the problem. It says their unintended consequences are the result of a political intervention in which the “full implications were not worked through and understood prior to implementation (or, if they were, were discounted)”.

The ENA says their removal should come with measures to protect users who might face bill shock as a result. It has offered to lead a process, with government agencies and other industry participants, to design them.

The united opposition won’t be a surprise to the high-powered panel overseeing the pricing review, or Energy and Resources Minister Megan Woods.

The minister has been careful not to pre-empt the outcome of the review, due in May. But she is alert to the risk that low-income consumers may end up facing higher energy costs as wealthier people install rapidly developing new technologies.

Solar panels and batteries may mean “more people who can afford to are able to draw less electricity from the grid, pushing the price of electricity up for everyone else - often the people who are least able to afford it,” she told an energy conference earlier this year.

Given the panel’s findings in its initial issues paper, members are likely to be considering recommending the government scrap the regulations. If that happens, the ball will be in the court of Minister Woods, who also has the power to refine the government’s $700 a year winter energy payment.

Removing the low-fixed charge regime will correct a 14-year anomaly which delivers sub-optimal results for all consumers and which are getting worse each year.

The electricity sector is ready and willing to ensure an orderly transition.